Inside Honeywell’s Advanced Recycling Research: Honeywell UOP Riverside operations in McCook, IL, outside Chicago, are a sprawling industrial site that houses a large central laboratory and dozens of pilot plants for research and development.

Between the operations here and another 30 miles north in Des Plaines, IL, there are 50 of these scale-up mini-plants.

It’s where bench-top laboratory experiments are developed into processes and optimized, with the goal of becoming a commercial reality.

“Processes scale from drips and drops to barrels,” says Kyle Austin, a 30-plus-year veteran at Riverside. “It all leads to risk reduction for innovation.”

With patents for unleaded gasoline and biodegradable detergents and numerous others over the years, Honeywell continues to be a powerhouse of innovation that generates 100 to 150 patents yearly. All of which relate to the company’s core business: designing and selling custom catalysts for industrial processes.

These days “innovation” means sustainability, for renewable fuels, for better batteries, and for plastics and packaging circularity. 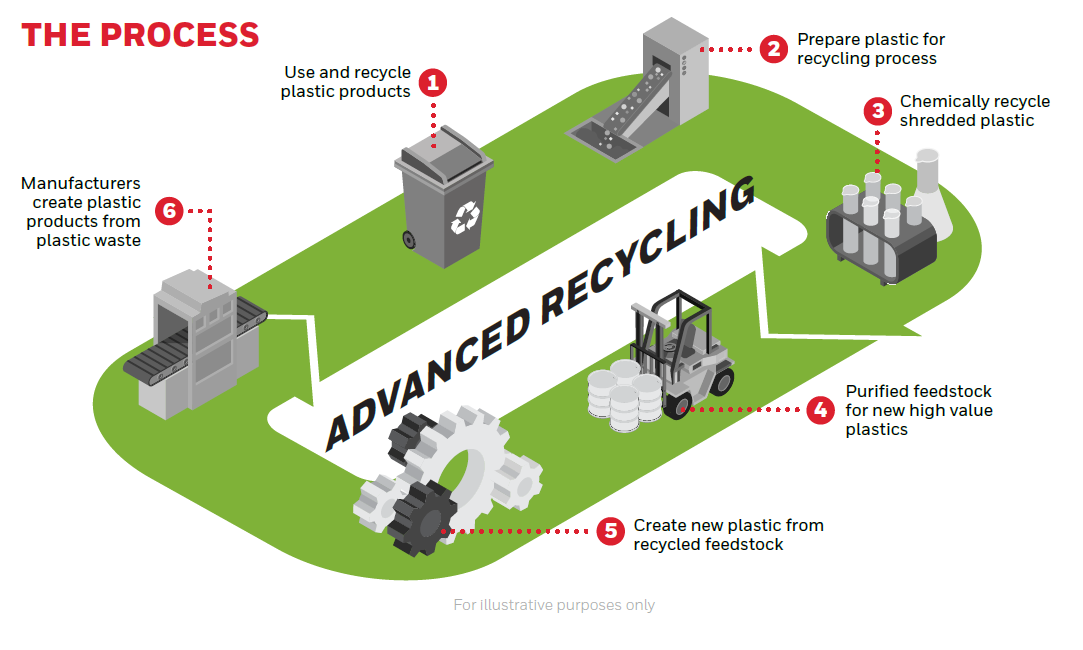 That was a special point of interest for PlasticsToday during a July 26 on-site media tour. The first stop was a pilot plant devoted to chemical recycling, which is largely synonymous with the broader category of advanced recycling.

This was where the company’s UpCycle process was tested and scaled into commercial reality. Within the last two weeks PlasticsToday reported that Honeywell’s UpCycle Advanced Recycling Tech Enters China, and in January, the news centered on Honeywell’s plans to build an advanced recycling plant in Texas in partnership with Avangard. A few months earlier in November, Honeywell announced the UpCycle technology will be deployed in a joint venture with Spain’s Sacyr to transform up to 30,000 metric tons/33,070 tons mixed waste plastics into feedstock annually starting in 2023.

Touring the pilot plant was a rare opportunity to trace these headlines to their post-lab, real-world scale-up stage.

As is the basic template in other pilot plants at the complex, the circular plastics pilot plant comprises several aisles packed with assorted squat or vertical tanks along with a maze of pipes and pumps and a myriad of miscellaneous equipment.

Prompted by environmentally concerned consumers and activists around the world, a continual stream of businesses of all sizes and sectors over the past years have publicly stated sustainability goals that have recycling as a firm foundation.

According to Ben Owens, VP & chief strategy officer, Honeywell UOP, “no longer can corporations say, ‘just use recycled content’, they have to be actively engaged to drive a circular economy.”

Owens views mechanical and chemical recycling as complimentary, “with each having its limitations.”

In effect, advanced recycling picks up where mechanical recycling leaves off.

Along with established albeit imperfect infrastructure, mechanical has a decided performance advantage with a caveat.

“If you can obtain a pure enough stream in terms of a carbon footprint, mechanical will win out over chemical recycling every time,” acknowledges Gavin Towler, VP & CTO Honeywell UOP.

“We’re concerned about getting the material back to a cracker and making plastics again,” notes Owens.

The need for atypical recycling has shifted into higher gear as the stakes have been raised, especially with the explosion in multilayer flexible packaging and other mixed-material formats.

Those are the markets beyond the practical reach of mechanical recycling where advanced recycling stakes a claim.

pyrolysis, the chemical decomposition of organic (carbon-based) materials through the application of heat. Pyrolysis, which is also the first step in gasification and combustion, occurs in the absence or near absence of oxygen, and it is thus distinct from combustion (burning). – Brittanica

The heat is on.

UpCycle uses what Honeywell calls “moderate” pyrolysis conditions in pumping the flowable material through vertical cylinders. Rather than combustion or incineration, the UpCycle does not consume oxygen or burn plastic for energy.

“In conjunction with other chemical and mechanical recycling processes and improvements to collection and sorting the overall plastic recycle rate can reach 90%.  In the UpCycle process, 80-90% of the plastics fed to the system can be converted to feedstocks for steam crackers to make new plastic,” explains Dean Rende, R&D director of plastics sustainability at UOP Honeywell.

That figure is in conjunction with other chemical and mechanical recycling processes and with improvements to collection and sorting.

According to Austin, pilot plant activity involves both customer- and Honeywell-driven projects.

“The UpCycle pilot plant starts with sorted, sized, and cleaned recycled plastic,” says Austin. “The material is processed through a reaction system.”

The final stage of the process removes some contaminants and splits the end product into the desired boiling range.

The absorbents used by Honeywell are commercially available stock materials.

For all of Honeywell’s expertise in catalysts, the UpCycle process use no catalysts for chemical recycling operations, Austin informs PlasticsToday. “The thermal process is basically the catalyst,” he adds.

The discharged material is pyrolysis oil that’s a precursor to make diesel fuel and, ultimately, to make new plastics.

According to Austin, what’s left for R&D going forward is to make the process more efficient including making use of the byproduct waste.

“We can drive yield higher,” asserts Austin, “but obviously that requires higher temperatures.” Honeywell continues its development efforts to increase the yield of desired products to maximize the carbon circularity.

Austin appreciates Honeywell’s distinction in offering what he calls “full chemical recycling. It enables make new virgin plastic from recycled feedstock. We’re excited about UpCycle because it broadens the circle of plastics circularity.”